CORONAVIRUS: WHAT CAN REMIND US FROM 2500 YEARS AGO?

CORONAVIRUS IS HISTORIC PLUS:

WHAT HAPPENS FROM THE PAST REMIND YOU OF THE STATUS OF CORONAVIRUS AND THE ATTITUDE OF THE WORLD LEADER?

The situation of the Covid-19 pandemia is something without precedent in modern history since 1917-1918 there has not been a plague like this.

But; should it be a surprise

The answer must be a resounding NO. Bible readers especially know that this was predicted.

Now, something that I thought about is that this event and observing the attitude of the people and the political leaders bring up an event that occurred over 2,500 years ago.

What do we mean?

Do you remember the 10 plagues that occurred in Egypt caused by Jehovah God, and the characters Moses, Aaron, Pharaoh, their priests and the people, both the Egyptians and the Israelites and others?

What I want to focus on is the ATTITUDE of both the people, religious leaders, and above all.

The chief executive of the United States in particular since we know he considers himself the most important world power of modern times.

To summarizing, we remember the Israelites were slaves for over 400 years and Egypt was their masters during that time.

And to some extent, we can compare this to being slaves to inherited sin since we were born.

Now a man by the name of Moses and his brother Aaron told  Pharaoh   to free his people.

The message of course from God. And he said that if he did not, there would be pests to come.

And we know what Pharaoh’s attitude was when he said: “And who is Jehovah so that I let his people go”?

So; That you have been able to appreciate all this or that it reminds you as you express the above, well let’s make some comparisons with today.

Doctors, scientists, people in charge of the Health Department, among others, warned in January that they were going to see a pandemic and were specific about where and when.

Let us say through illustration only, that they represent God in the sense of what they predict and command to avoid the plague from affecting the people.

Now before continuing that line, it came to my mind that the Chinese did not report when they should.

Get the picture here, Mr. Navarro and even Dr. Faucci later gave written and verbal warnings respectively and there is clear evidence if you do your research.

And what was the reaction of the modern Pharaoh, and who is that virus to come to our nation (my words according to their expressions)?

There is a video that shows the President denying or not giving importance to these 31 occasions and that was during January and early February; 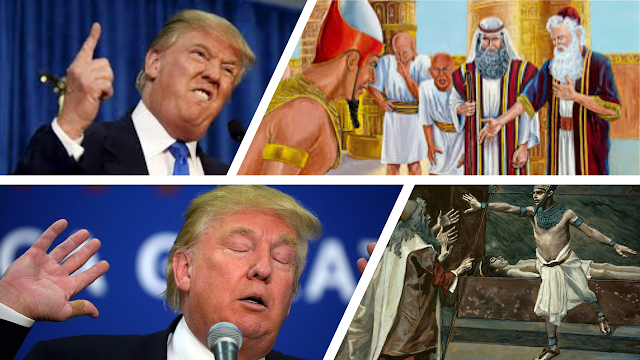 But what about people?

If we remember only the obedient ones although they were affected in other ways, in particular, the first 3 plagues but most of them did not get sick or lost their lives.

And we should note is not only the Israelites but even some Egyptians exercised faith in Moses and his warnings.

But in all this what I want to highlight is the modern Pharaoh, and it is his PRIDE AND THIRST FOR POWER AND RECOGNITION.

And let’s not forget the priests and sorcerers of Egypt like today the false and hypocritical religious leaders who meddle in politics.

These parallels what is going to happen one day soon, but although it sounds dire, Lucas’s words take on more meaning when he said:

“When you see these things happening, raise your heads upright that your liberation is near,”

In my next post, I will mention some points where it shows more clearly how the hypocrisy and lack of humanity, lie in the political arena and a group that we have not mentioned that are the people of the press.

P.S. Remember even that we know normally we cannot do anything from the past and future, but that is not entirely correct. We can learn from the Past and a Lot.